We are excited to announce that Ryan Eves will be the new Executive Director of YMCA Camp Kanata! 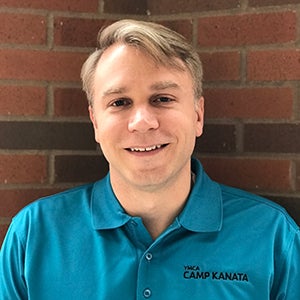 Ryan is known for his passion for developing staff, his strong leadership, and his exceptional relationship building skills. For the past five years, he has worked to ensure that all YMCA of the Triangle staff have the training and resources necessary to deliver impactful experiences to our communities which he will now bring to Camp Kanata.

Throughout the years, Ryan has remained connected to Camp Kanata through the Annual Campaign, supporting change efforts, and providing resources to all Overnight Camp staff. “I am thrilled to essentially be going back home. Camp Kanata shaped and guided me through so many pivotal parts of my life. I am looking forward to being able to give back to a place where I can do the same for others as we continue to invest in the future of our community.”

Ryan is committed to continuing the excellence of Camp Kanata’s Summer programming and working to expand the Camp’s impact throughout the year. “At Kanata, you belong. Everyone is family and everyone is welcome no matter how long ago you were a camper or staff member. Through intentional programming and community engagement, you become the best version of yourself. What an honor to join the long history but short list of people who have been lucky enough to call themselves a Camp Kanata Director.”

Ryan graduated from the University of North Carolina at Chapel Hill with a degree in Psychology and English Literature and holds an extensive portfolio of professional memberships and leadership certifications. He lives in North Raleigh with his wife, Katie, and daughters, Harper and Quinn. He is also actively involved as an Elder at White Memorial Presbyterian Church in Raleigh. Camp Kanata is a meaningful place for everyone in his family, as he proposed to his now wife in front of the old CILT Cabin and is looking forward to his daughter Harper being a first-time camper in Summer 2019.

Ryan will begin as the Executive Director in January. Please join the Camp Kanata team in welcoming Ryan!